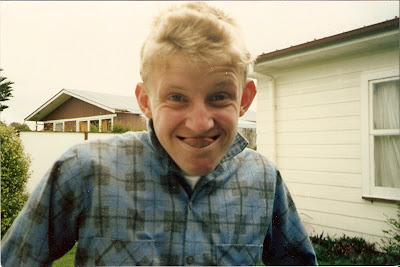 The other day I bought this book which basically challenges you to treat your life like one big artistic experiment. It's kind of cute and one of the first challenges is to wander around your neighbourhood and catalogue the sights, sounds and smells along your trip.

I tried this today but I kept getting distracted because it seemed every second car passing me by was blasting the hits of Michael Jackson. Seriously, people, if I was going to choose a period of time to time travel to it would definitely NOT be 1987 (mainly because that's what I looked like in 1987 - what happened to my gaddamned hair?!).

Look, I get it - I know he was big, I was there (although I was never much of a fan). I remember when the Bad video premiered on TV, it was a prime time television event. Admittedly, this was 80's New Zealand where there were only two channels and an episode of Coronation Street would probably qualify as a 'premier' television event but nevertheless MJ was big news. I'll even admit that those early songs are cool and never fail to get people over the age of thirty drunkenly dancing in embarrassing ways at parties.

I'm not going to begrudge anyone their love of Michael Jackson as I'm a revisionist of the highest order (that's why I love Lost Highway) but really this hysteria has gotten a little out of hand. As of June 24, Michael Jackson was slightly creepy and a bit of a joke because - well, you know why. That he died the next day doesn't change that fact - he doesn't suddenly become the King of Pop again all sins forgotten. The death of anyone is sad and I'm sure his family are devastated as any relative would be but the tragedy that was his later life can't be erased so simply - well, not in my mind.

Look, I don't know, I didn't know the guy but one thing his death has perpetuated is troubling - more Richard Wilkins on television and frankly, that's a bigger concern to the health of our world than the death of a faded pop star.