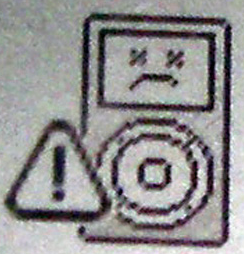 I think I have explained before that I have two ipods: iplod, my 60gb library on the move for long trips and guypod - the day to day going to the gym shuffle filled with guy music to make me run faster.

These days I mainly use guypod because it just fits into my pocket and is a nice distillation of up tunes to get me through the day (generally punk, rock and metal). However, I have noticed a strange new behaviour that is slowly taking hold over me. It started with gentle head rocking while listening to certain songs. I think that's ok to be in your own little world and bopping along.

But then I started to noticed my head started to go the full on head bang when certain heavy bits of songs would kick in - just one or two but a head bang nonetheless. Fortunately, it looks more like a involuntary head spasm than a cue for me to jump up on my seat on the bus and play air guitar.

But it gets worse: I started making what I would refer to as ipod face where I scrunch up my face (guitar solo style) during some of the heavier rock moments on guypod. These facial contortions probably make me look like I'm having a stroke when I'm on the bus to work each morning but as is the case with public transport, everyone pretends to ignore the crazy person.

This problem reached its apex this morning when walking down King Street, I was listening to this new Superchunk song which I love and during the chorus I started singing... out loud... in the middle of the street. Fortunately, it was peak hour and no one could really hear me but still...

I feel like I'm one step away from walking down the street with a transistor radio to one ear while screaming at young people that aliens run the planet. That being said, I'd much rather risk dementia than have to listen to the dull beat of someone else's ipod or worse, inane mobile phone conversations the morning. Don't these people know I must be alone until at least the first cup of tea or 10am? (whichever comes first).

So if you see a crazy man on public transport, banging his head, singing and playing air guitar to his ipod, it's highly likely to be me. It was bound to happen - just accept it...