I was a teenage metalhead... 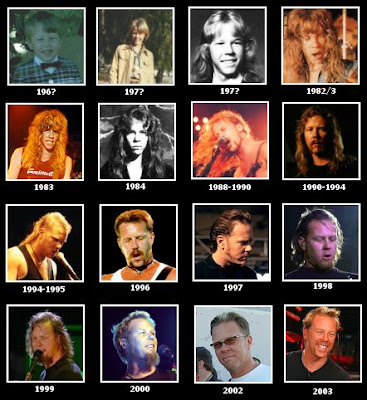 I make no secret of the fact I was a teenage metal head. I listened to Black Sabbath, Led Zeppelin and nameless other bands until Nirvana swept that all away. To be honest, my allegiance to metal was actually tested earlier when I started to fall in love with Jane's Addiction, Husker Du and Faith No More - all heavy but in other ways to be sure. Even so, I have still listened to Metallica on and off since I was about fourteen. I figure if you're going to listen to a metal band it might as well be a band called Metallica (seriously, if you step away from the legacy of one of the biggest bands in the world and look objectively at the name, it's pretty stupid). So, this last Monday I got to see Metallica live for the first time...

I have to admit I was a bit trepidatious about it at first. I mean there is a part of me that clings to the Metallica of my teens (1988 on the Hetfield mullet watch above) - the lion maned front man who chugs jagermeister on stage with EET FUK inscribed on his guitar while leading a cyclonic, humourless riff monster through eight minute songs about pain and suffering - like, awesome! My eternal teenager loves those guys - I mean, come on, their nick name was Alcoholica! I remember when they toured with Justice For All in the 80's and there was a riot which resulted in running battles between fans and police. That's how serious it was back then. Metal or death! Metal up your ass! METAL METAL METAL! My concern was that the post-therapy Metallica would be more Master of Ceremonies (Hello Cleveland!) than Master of Puppets (I'm your source of self-destruction!).

I need not have worried. Even though James Hetfield kept yelling out "Hello Brisssssbane YEAH!", the great thing everyone forgets about metal is that it is both fun and hilarious (unless you are a boy aged 14-18 and then it's very, very serious indeed). So I sang along to most of the songs, threw some devil horns and had a great time. I bounced up and down to my favourites (BA-TER-RY!) and scoured my memory for songs long forgotten (I couldn't remember Motorbreath off Kill 'em all for the life of me). And just to make me feel better about missing the old days, they played a 10 minute version of the angular riff, tricky time signature dour fest which is the title track of And Justice For All... - let's face it, if I was fourteen, I would have loved but at 37, I was looking for the exits. That ten minutes made me miss the all-entertainment Metallica which soon came back. They even dropped big black Metallica balloons (Metalliballs as I like to think of them) during Seek and Destroy - this shit was off the hook.

My second source of trepidation was that I was going to see them in bogan heartland - Brisbane. The thought of a 15,000 black clad bogan army descending upon me was a little horrifying. Would I get eaten alive? Would they notice that I wasn't metal enough? I shouldn't have worried because the crowd were the best bit of the night. I don't think I have laughed so hard at a concert because bogans love metallica like indie kids love skinny jeans and irony. I don't want to come across as mean but it was their enjoyment of the show that made it just that much more fun for me and my brother who went. Firstly, there was a guy dancing to the left of us like Magda Szubanski in this video...

Seriously, you kind of see people doing that dance in old countdown episodes - some form of primitive bogan waltz.

It was hilarious but I noticed the guys to the left of me laughing at him. I thought this was a bit rich as they were rocking back and forth in unison playing air guitar (like Status Quo). It was a hair farming frenzy as the moves they had been perfecting in their bedrooms for the last 20 years were finally on show in a place that they would be accepted. Bad dance guy was just as moved by the music but at least he wasn't pretentious about it? Pretentious how? Well, metal dudes on the left all had obscure metal band shirts on (you don't need to know who Voivod is) and stood stoney faced with arms folded when they played anything off the Black album (you know, when Metallica sold out) - a sure sign that they were serious fans, not like the rest of us posers. Metal dudes also had one other signature move which was to thrust their fist in the air at a right angle at the end of an awesome line in each song (the move is similar to a body builder flexing his arm muscle while raising it in a metal salute). I'd like to think of it as "By the power of Thor" move. It was apparent that they had either caucused earlier or they all thought the same lines were amazing as they all fist thrusted in unison too.

The last guy I'd mention was in the stands and he reverted to some primal monkey-like state - bare chested holding on to a rail and jumping up and down and screaming. Did I mention that monkey had been infected by the rage virus from 28 days later? Madness, I tell you, madness. But there was many examples of this kind of behaviour and I stayed weeeeeeeeeell away from the moshpit.

BTW if you see me, I'm happy to re-enact any of these moves for your amusement.

Sadly, I have no photos as I left my camera at home but be rest assured that my hearing is still destroyed and yes, I'm listening to Metallica as I type this but the Black album because I'm a sell out...