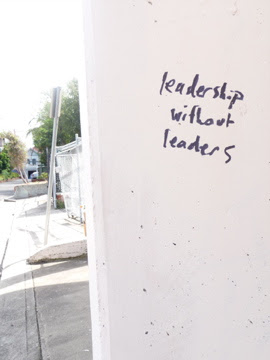 Leadership without leaders. I think I get what they're saying: through collective organising at a grassroots level, we, the people, can create our own destiny... OR maybe they mean literally, the word leadership - leaders = hip.

This actually got me thinking about Barack Obama. Prior to his election, it was widely reported that the only time an African American was President in Hollywood, a meteor was about to hit the planet. Now, this is generally true and it had to be Morgan Freeman (not discounting Dennis Haysbert as the President in 24). As such, I am actually quite curious as to how Hollywood will adapt to this new paradigm.

The main reason for this curiosity was the fundamental shift in the portrayal of the President when Bill Clinton got into office. Reasonably young, energetic, smart and (as we subsequently found out) sexually active, the films produced after his election had a radical shift from the patriarchs of the past. Suddenly, the President was funny, a smooth lady's man, an inspiration, or a kick arse action hero. Prior to that they were generally graying old men with the exception of the weasley president in Escape From New York.

As such, will we see a radical shift in the way the President is portrayed onscreen? I sincerely hope so. I mean, if David Chapelle has already played Bush then my vote is for Red Man as President with the Wu Tang Clan as his cabinet. Yeah, that would be awesome...