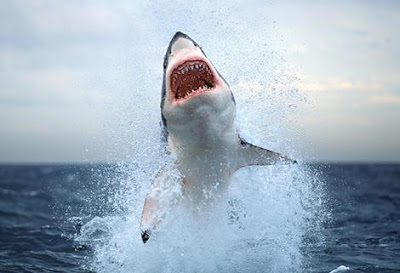 About a week ago, I read (and subsequently became obsessed with) this article which basically explores the similarity of shark behaviour to that of a serial killer. Apparently, great whites stalk their prey rather than it being a random attack. For example, sharks have swam past other swimmers to take out a person closer to shore or have knocked other swimmers or surfers out of the way to get to a person when it would have been easier to eat someone closer. More scary, they get all Ted Bundy about it and hunt the same spot and observe their prey from a distance before attacking.

What does this mean? Well, it means that Jaws 4: The Revenge is probably the most misunderstood and awesome movie of all time. In a nutshell, the plotline of Jaws 4 is that the family of Brody (Roy Scheider in the original movie) is being picked off one by one by a vengeful shark. They even go from Amity to the Bahamas and the shark follows the family and keeps killing them! Good times.


Currently, Jaws 4 ranks a 0% on Rotten Tomatoes and of the reviews listed, "No review available" was probably the most favourable thing written about it. However, in light of the new research, it's obvious that what I thought was one of the stupidest movies of all time is in fact a brilliant analysis of shark behaviour and adds a cautionary tale to anyone who has ever eaten fish and chips. Sharks know - alright, they just know and if you stray into their kill zone, you're history. Good job I don't swim in the ocean. Enjoy your summer at the beach!