James Cameron got my twenty bucks 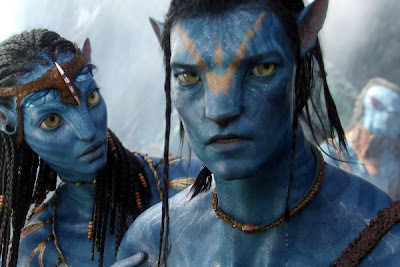 So I'm off this work this week and decided to finally see Avatar. I was always planning to see it as unlike most people, I haven't seen Titanic and like most people, I am a fan of Terminator 1&2 and Aliens. So how'd Jim fair? As with everyone else, it was visually impressive although I was more taken with the little things like ash falling rather than the big action set pieces. I kind of fell in and out of unreality - sometimes getting engrossed into the film and forgetting it's one big digital effect only to be jolted out of it by something not quite right or something stupid that Sam Worthington said. I know the story has been analysed to death so I have nothing really to add except it was serviceable but hardly the non-stop headfuck that Aliens was on first view.

What has really been interesting me is all the discussion that Avatar is a game changer for the film industry. Now that Cameron has developed the technology to make this kind of film, any subsequent films of its ilk should be cheaper to make. Further, with the announcement that the next Harry Potter movie and Clash of the Titans will be released as 3d movies it seems that this will be more common. Technologically speaking, this has changed things but will these films work with out the bazillion dollar budget Avatar had? I mean is it far more groundbreaking that an untested director (Neill Blomkamp) made an infinitely more interesting Sci-Fi film (District 9) on a relatively small budget? Is it more interesting that plausibly the most enjoyable film experience I had this year (Fantastic Mr Fox) relied on stop-motion animation and a great story? I'm not sure a bigger budget or 3d technology would have made either of these film better.

I think the concern of Avatar is that it somehow justifies these $230million budgets because it's made a shitload of cash. I love movies but spending the nation GDP of Vanuatu on getting the CGI tears of an alien baby accurate seems somehow... excessive. I guess there will always be blockbusters (and I love them too) but I guess this might be my point, a film maker spending $200 million+ on a film isn't going to make anything particularly challenging so that it wouldn't alienate mainstream audiences. The last big budget film which really pushed some boundaries was Watchmen - sourced from a great graphic novel and not as bad as people made it out to be. But its box office failure no doubt stopped the film industry seriously considering the production of big budget films with anti-heroes and challenging plots. Or maybe Kickass will change that?

Anyhow, there's no central thesis here, I'm just talking. I just know James Cameron got $20 out of me for a film I think probably supports the more excessive trends in Hollywood. Then again, I did just enjoy my last three hours so maybe it's money well spent...