People got a lotta nerve... 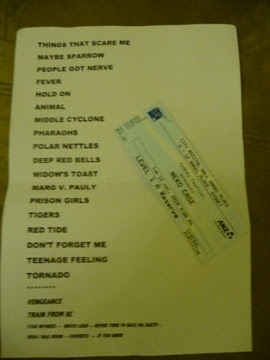 For one reason or another, I haven't been going to many gigs recently but I was positively giddy at seeing Neko Case last night. And it was almost the perfect evening. Rolled up and got the rock star park out the front of the venue. Got the tip off to arrive early and sauntered in to get front row seats (no seat allocation for some reason). Neko Case puts on an amazing performance and plays the perfect set (all my favourite songs!). Show finishes, a set list is secured (above) and then off for great Vietnamese. All brilliant!!!

But there was one low point of the set. I don't know if it was a function of the gig being part of the Sydney Festival or that it was in a concert hall but in between songs some woman yells out, "Can you turn your amplifiers off?" Lady, amplification allows us to hear the music so what the FUCK are you talking about? Maybe she expected an acoustic set or something but this did not go down well. I think Neko thought it was a statement on the quality of the music and she got well pissed off basically chiding the heckler for a while and looking angry for a few songs until she regained her composure.

I've been to a lot of shows and heard a lot of hecklers - the drunks, the abusive losers and the overzealous fans but that shit was just weird and just kind of dragged what was an amazing performance down for a little while. People?!... words escape me...