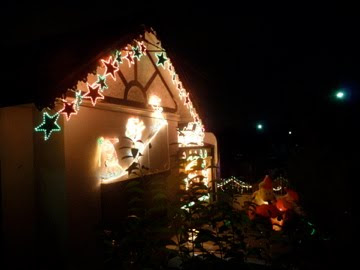 Happy new year. My question is, when is it reasonable to demand your neighbours take down their stupid Christmas lights? This photo was taken ten minutes ago. 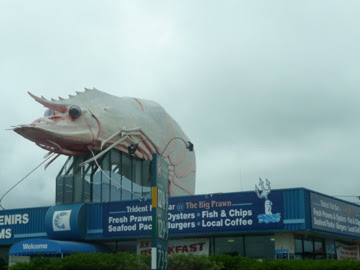 New year resolution/revolutions will not be entered into here but as usual it is the bunch of self improvement promises that everyone has. I also wanted to note that when visiting my parents, I passed the big prawn for probably the last time as it is due for demolition soon. My Dad asked me if I wanted to get out and take a photo. The obvious answer is no and here is a shot for prosperity as we drove by. The big off prawn, may you rest in many pieces.

I wanted to talk about my favourite Vietnamese restaurant. Feeling lazy, I went down there tonight for some food and I noticed two things. Normally, they play that kind of relentlessly cheery Asian pop that you only hear when you're on tour in SE Asia - the kind they play insistently on six hour bus trips at volumes that no ipod can disguise. ANYHOW, I have started to notice a trend in that whenever a non-Vietnamese person walks in, the Asian pop is quickly replaced by an album of western power ballads. It starts with Richard Marx and then quickly heads down to Mariah, Whitney and Celine territory. Not pretty. They also have a TV playing loudly to compete with the terrible music which I noticed wasn't on tonight. The beautiful host (and she is a lovely and wonderful host) saw me looking at the blank TV and promptly turned it on. I'm hoping they aren't playing this music specifically when they see me walking in but that would be paranoid, no? Thoughts, suggestions... Maybe, I'll just get take away next time.

Finally, I've been working on my list of top 100 albums of the 00s but it is more exhaustive and time consuming than I thought. However, being that I am in a list mode, while watching some videos on Max (God bless pay TV at my parent's house), I saw an old Madonna video that got me thinking about guilty pleasures. I kind of hate that term because I rarely feel guilty about liking pop songs but there are a whole bunch of songs with infectious choruses that I had passing affection for but which you will never find on my last.fm charts or on my ipod. So here are my list of the top (not so) guilty pleasure songs for each year of the 00's:

2004 My Happy Ending - Avril Lavinge (I know, I KNOW - she is THE worst but this song has a killer chorus. Weirdly, Bob Mould totally rips the vocal hook off on the song Beating Heart The Prize).

2005 Since U Been Gone - Kelly Clarkson (I STILL LISTEN TO THIS SONG! SHAME! This nudged out the Veronicas 4ever and Rhianna Pon the Replay - seriously)

2009 I Do Not Hook Up - Kelly Clakson (I know, she basically remade Since U Been Gone but I'm still a sucker for this song).

So there you go, those are my dirty little secrets. Notice I didn't put any Beyonce or JT on the list - that's because they're awesome and Crazy in Love is probably one of my favourite songs ever... I feel dirty... I'm going to listen to some Slayer.

Anyone got any bad music confessions?